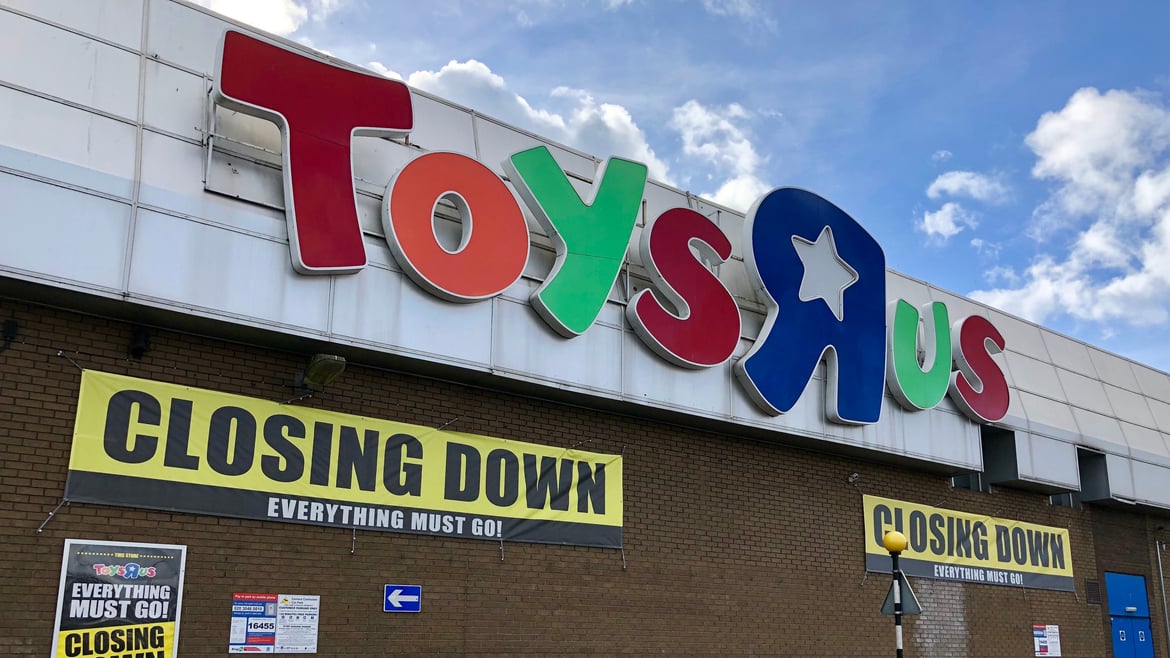 Did supply chain problems have anything to do with Toys "R" Us going out of business? The company's jingle famously declared "I don't wanna grow up"—but it is exactly this reluctance (or at least inability) to mature amidst a rapidly-evolving retail landscape that led to the company's ultimate downfall.

In mid-March, Toys "R" Us announced plans to close down and liquidate the inventory for all 735 of its stores in the United States. After more than 70 years in business, the implosion of the iconic toy giant came as a shock to many, although industry insiders may have been able to predict the company's closure in a market that continues to be plagued by the so-called "retail apocalypse."

But the full story is one of more than just another retailer falling victim to the astronomical rise of e-commerce. With $5.2 billion in debt following a $6.6 billion leveraged buyout by Bain Capital, KKR & Co, and Vornado Realty back in 2005, Toys "R" Us was already standing on shaky ground by the time online commerce began to take off in a new era dominated by Amazon.

Saddled with a mountain of debt and struggling to retain sales lost to increasingly popular mobile and tablet gaming, the toy retailer was unable to keep up with the shifting retail landscape and finally filed for Chapter 11 bankruptcy back in September. It had originally hoped to restructure and emerge from bankruptcy with a reinvestment plan that involved upgrading online sales, revamping brick-and-mortar locations, and integrating augmented reality into the customer's shopping experience.

But following suboptimal performance and mounting pressure from chief competitors over the holidays (resulting in profits that fell short of expectations by a quarter-billion dollars), the retailer is now being forced to lay off 33,000 employees in what marks the end of an era for the toy industry as a whole.

Blood in the Supply Chain

On top of simple bad luck, it appears that supply chain problems dealt one of the final blows that sent the behemoth toppling. Although declining to provide exact details into the matter, Toys "R" Us said it faced unexpected "delays and disruptions" in product supplies throughout the holiday shopping season, which it attributed to vendor concerns that the retailer would not be able to make good on promised payments.

It also struggled to compete with big-box retailers such as Target and Walmart, which were able to offer toys priced at low margins with aggressive online shipping options—sometimes even at a loss—since, unlike Toys "R" Us, their business models do not rely exclusively on toys for profit.

An unreliable stream of supply, coupled with steep discounts offered by competitors, made it impossible for Toys "R" Us to execute on its usual holiday strategy of "selling late at high margins after competitors sell out of 'hot' inventory and attracting last-minute shoppers who fear that online deliveries will not be made in time."

The lesson to be learned here is the cruciality of customer experience in an economic landscape where consumers increasingly put a premium on innovation and one-of-a-kind offerings. Billions in debt prevented Toys "R" Us from being able to invest in the kinds of unique services that have become need-to-haves, rather than nice-to-haves, over the past few years.

Toys "R" Us' Canadian and European stores will remain open, although the company is now in the process of auctioning off its name, online presence, and properties. In April, it rejected an $890 million bid from toy manufacturer Isaac Larian, in a move further cementing the bleak future ahead for the company's namesake. But as the demise of the brand will leave behind a hefty 15 percent market share up for the taking, the question remains as to where its former customers will go to buy toys now.

While the downfall of Toys "R" Us certainly doesn't mean the end of the toy market as we know it, the industry is now at a crossroads as it finds itself forced to confront a recent history of barbed losses—KB toys shuttered its business in 2009, and FAO Schwarz closed its flagship store in New York City in 2015. Developments such as these have toy retailers rethinking their strategies for reaching consumers, who now possess significantly more leverage over brands than they did a decade ago.

Toy manufacturers have also been hurting since the liquidation announcement back in March; both Mattel and Hasbro have seen share prices dip, with the latter now looking to increase control over online sales in the wake of recent events.

It is likely that the top two toy retailers (Toys "R" Us being the third largest toy retailer in the U.S.) will swoop in and capitalize on the closure of their former competitor. However, the greatest gains will most likely be reaped by discount department stores such as Walmart and Target, given that the vast majority of toy buyers through Amazon are Amazon Prime members.

While the liquidation of Toys "R" Us will not bring any major changes to the average consumer's toy shopping experience, there is no doubt that millions will be sad to see the staple childhood stop reach its unexpected end.

“America’s world-class infrastructure is falling behind the rest of the world.” reads the first paragraph of the President’s recently released 2016 budget plan on transportation. The plan then outlines nearly half a trillion dollars in spending...

Read more
Can Technology Save the American Freight System?

Read more
Is Samsung's Supply Chain Prepared for its Demand?