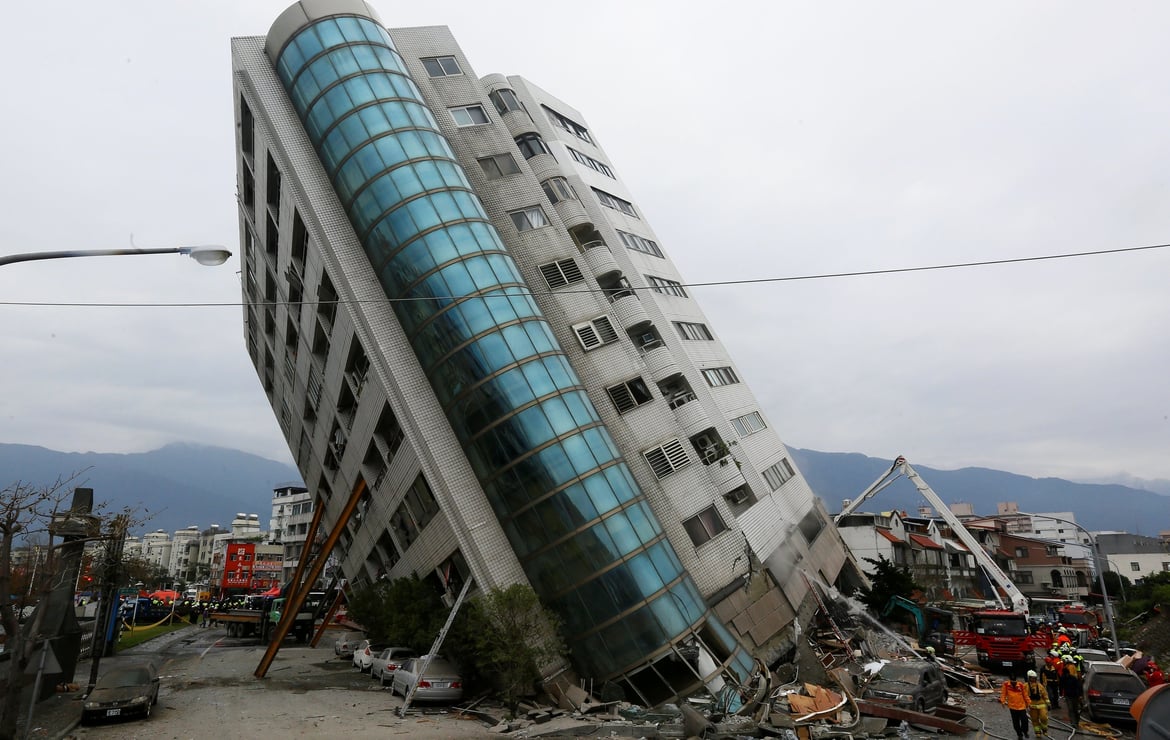 Published on
February 7, 2018
Taiwan was hit by another 5.7 magnitude earthquake Wednesday night at 11pm local time, nearly 24 hours after a 6.4 magnitude quake killed at least seven and left dozens more trapped in the eastern city of Hualien. Hualien’s population of 350,000 felt the strongest impact of the quake, with five surrounding cities feeling light shaking.

While not the business center of Taiwan (commerce is concentrated on the country’s west coast) Hualien is a popular tourism hub.
According to the Taiwan's Central Weather Bureau, the two earthquakes and subsequent aftershocks (numbering over 100) mark the highest ever recorded in the region, with additional earthquakes of magnitude 5.0 higher likely to occur over the next two weeks. Although earthquakes are common to Taiwan's eastern coastal region, this particular pattern of seismic activity was noteworthy for its strength and frequency. The most recent quake struck 22 kilometers (13.6 miles) northeast of Hualien at a depth of 10 kilometers (6.2 miles).
While the quake was felt throughout the country, the coastal city of Hualien bore the worst of the damage, with many buildings collapsed or tilted on their foundations. As the situation unfolds, rescuers are now working to free residents trapped inside of apartment buildings. Cranes have been used to temporarily prop up large buildings like the Yun Mei Tsui Ti complex to aid rescue efforts.
Details on the nature and scope of the damage are still emerging, although it is known that some at least five major buildings have collapsed in the densely-inhabited city of Hualien, including the Marshal Hotel, the Guosheng 1st Street Building, the Guosheng 6th Street Building, the A-Guan Hotpot Building, and the Parkview Hotel.
Massive cracks have appeared on paved roads in the region, and certain bridges and highways remain closed pending inspections. Two bridges in Hualien City have been damaged and sealed off, including the Qixingtan Bridge, while the Suhua Highway has been closed to traffic following multiple landslides. The Central Cross-Island Highway has also experience landslides, leaving Provincial Highway No. 11 as the only route remaining open. The road section between the 172 and 176 kilometer marks on Provincial Highway No. 8 is closed due to reports of fallen rocks, but is expected to reopen by noon Thursday (local time).

Operations at three of Hualien Port’s wharves have been suspended after the Taiwan International Ports Corp noted that deep foundations had subsided and cracks had appeared, making loading and unloading unsafe. There is no estimate so far of when these wharves will reopen.
Taiwan Railways and subway networks were temporarily slowed or closed but have returned to normal operations. Speaking from a crisis center in Taipei, Cabinet spokesman Hsu Kuo-yung said rail links appeared to be unaffected and the runway at Hualien airport remained intact.
The country’s position directly on the Pacific Rim of Fire makes it highly vulnerable to seismic destruction. Local seismic experts claim that earthquakes occur cyclically in the region and so more, and more devastating, earthquakes should be expected in the next 10 years.
Natural Disaster, supply chain disruptions, Asia

Consumer electronics could be facing months of supply chain disruptions after the Kumamoto quakes rattled manufacturers in Southern Japan.