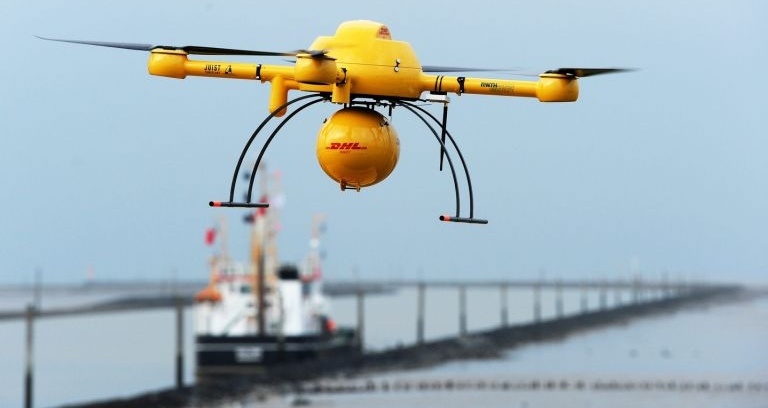 Transportation companies, e-commerce goliaths, and tech startups worldwide are testing drone and droid deliveries with an array of products, from fast-food orders to consumer goods. How will these emergent technologies affect supply chains?

Unmanned Systems in the Supply Chain

Drones, otherwise known as unmanned aerial vehicles, have been garnering the attention of innovators across a wide range of industries for several years now. In the supply chain space, these flying devices are on the cusp of transforming how companies deliver goods into the hands of customers. Another significant application includes inventory control in warehouses, where drones have the upper hand in terms of both efficiency and accuracy when compared to their human counterparts.

Amazon recently made headlines after receiving U.S. patent approval for delivery drones that have the ability to react to human signals such as screaming voices and flailing arms. Five years into developing its Prime Air program, the patent approval marks a significant step towards the company's goal to eventually be able to deliver goods weighing less than five pounds in less than 30 minutes via air. In late 2016, it successfully delivered an Amazon Fire TV and a bag of popcorn to a customer in Cambridge in just 13 minutes, as part of a trial run in the U.K. However, much work remains in both the R&D and regulatory arenas before the concept will be ready for rollout to wider audiences.

German shipping magnate DHL is another major player in the drone development game, having been experimenting with drones since 2013. In early 2016, it began testing its "Parcelcopter 3.0" drone in the Bavarian Alps, successfully completing over 100 deliveries between two remote villages. Focusing on delivering packages between centralized locations (instead of the front-door drop offs targeted by Amazon), the program leveraged a fully automated process traveling along a single route—thereby enhancing scalability potential and increasing the likelihood that the technology will soon be integrated as a routine aspect of the business.

Droids (the earthbound equivalent of drones), otherwise known as delivery robots, have also begun to emerge as testers in pilot programs. While they remain a relatively rare sight (except for people who happen to live in Washington, DC, or the San Francisco Bay Area), delivery robots may soon begin to appear on sidewalks throughout the U.S.

These futuristic containers on wheels, designed to autonomously navigate walkways (not roads) are changing the game for e-commerce's biggest challenge—last mile logistics, which currently comprises 30 to 40 percent of the cost of delivery for the average e-tailer. Cheaper than drones, droids also face fewer regulatory restrictions and may prove to be less expensive on a per-mile basis. However, their dependence on paved walkways means that they are restricted to operating within urban areas. And in densely populated cities where sidewalk space is already limited, many companies may opt for the more low-tech option of bicycle couriers in order to get goods to their final destinations.

At the forefront of the delivery robot movement is a model developed by Starship Technologies. Starship's self-driving "ground drones," powered by rechargeable lithium-ion batteries, travel at a maximum speed of four miles per hour and can carry up to 40 pounds. Food delivery startups such as DoorDash and Postmates have been successfully experimenting with the wheeled contraptions, which are relatively quiet and better for the environment than traditional delivery vehicles.

The benefits of using these types of vehicles are twofold. First, from a cost perspective, robots and autonomous systems, whether grounded or airborn, provide the advantage of reduced operating costs at a time when wages are increasing and the cost of technology is decreasing. Second, comes the convenience factor; with projected delivery windows of under an hour, unmanned vehicle delivery turns instant gratification into reality, while also providing the flexibility of being compatible with various different delivery models. Drone and droid delivery seems to be the logical next step in an environment in which consumers increasingly expect lower prices and faster delivery for their online purchases.

Thus far, the majority of drone and droid programs have focused on last-mile delivery. In the future, however, analysts speculate that applications will expand to involve processes lower down in the supply chain, as early as the raw materials stage.

At the same time, it may be several years before cities across the U.S. begin seeing widespread use. A recent report by Gartner estimates that drone deliveries will only represent less than 1 percent of the commercial drone market by 2020 (at which point it is estimated to be worth $11.2 billion). A major part of this delay can be attributed to unanswered questions regarding the overall safety and regulation of the new technology.

Safety and regulatory concerns are the largest obstacle currently hindering the mass adoption of robot delivery fleets. Both developers and regulators are currently working together to answer tricky questions such as: If an unmanned vehicle is involved in an accident, who is held accountable? And in what ways should they be treated the same as or different from human-facilitated delivery methods?

In the United States, commercial drone usage is regulated by the Federal Aviation Administration (FAA). In 2016, the regulatory body adopted the first set of rules controlling how high they can fly, how much weight they may carry, and who is allowed to operate them. Moreover, battery life also limits how long drones are able to remain airborne (meaning that multiple deliveries in a single trip remain a ways away from becoming reality).

Droids, on the other hand, don't fall under federal jurisdiction, and are instead subject only to city and state regulations. This will pose a challenge for businesses who will have to figure out how to build scalable delivery models while taking into consideration varying laws across borders. In a break from its usual tendency to encourage tech development, the city of San Francisco recently passed new regulations that limit companies to three robots each and restrict travel to thinly-populated industrial areas.

As a result, it is unlikely that widespread drone deliveries will materialize in the next few years. It is worth noting, though, that the use of unmanned vehicles for last mile delivery reflects just one potential application out of countless others that will transform supply chain dynamics over the next decade, forcing leaders to adopt new business models and rethink how they interact with their customers.

Supply chain is finally finding its way into the 21st century, with help  from a constantly evolving landscape of technologies and digital opportunities. Companies are now looking to the cloud, big data, blockchain, and other solutions to manage... Read more
Supply Technology Roundup: IoT and 3D Printing

Digital transformation involves the strategic overhaul of business activities, processes, competencies, and models to fully leverage the opportunities made available by new technologies. Two cutting-edge technologies being implemented today are...