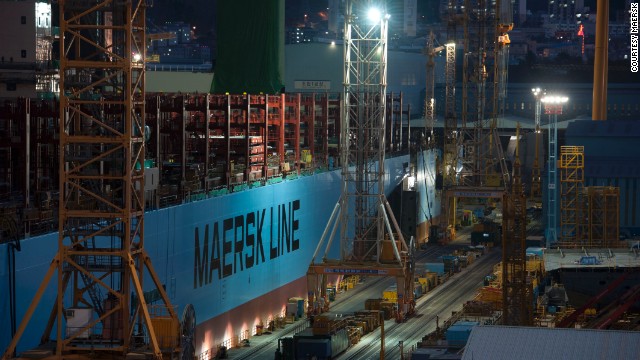 Ship it Good: What Do Maersk’s New Ships Mean for Water Transportation?

Shipping giant Maersk posted healthy profits this quarter despite declining freight rates. The losses were offset by cheap oil prices – not a sustainable source of profit. Maersk must find a way to mitigate recent issues with low shipping rates, overcapacity, and delays. Ships like Maersk’s transport over 95% of the world’s manufactured products, and demand is set to increase 3% - 5% this year. But ships have proven to be inefficient, especially due to recent port strikes and bottlenecks. As a result, higher volumes of imports and exports are not translating to fuller ships. Manufacturers are looking elsewhere for transportation options, and shippers need to work to increase efficiency and cost-effectiveness.

Maersk’s largest container vessel currently carries 18,000 20-ft containers, and the company uses twenty across the globe. In response to the problem of slowing demand, CEO Soren Skou announced that Maersk would invest in 6-10 20,000 TEU ships, paying Korean manufacturer Daewoo Shipbuilding $151 million per vessel. The first 20,000 TEU ships should be arriving in 2017, and are expected to cut costs and increase efficiency by making fewer trips. The ships will also be more fuel efficient. Whether or not this will pan out as Maersk hopes is contested by business analysts and insurance companies alike; most analysts feel that Maersk is taking a huge risk that may not pay off.

However you look at it, Maersk’s big move is bad news for smaller container companies. The purchase of 20,000 TEUs by Maersk will strengthen its alliance with the Mediterranean Shipping Co. In partnership with each other, the so-called “2M” alliance allows for substantial cost cutting through the sharing of vessels. In addition, the shipping industry has been forced to lower freight rates due to overcapacity; alliances help ease the burden and keep costs stable. These corporations tend to make capacity deals with each other, so the purchase is helpful to Maersk likely due to deals with other carriers, rather than actual demand.

Insurers have raised concerns over the huge risk that comes along with such a large vessel. They have listed the exorbitant costs that could result from a grounding (up to $4 billion), holdups from mislabeled or misplaced containers, and crew safety issues as catastrophic risks. The newest and most worrisome threat to many is that of cyberterrorism. Increasingly large ships run on increasingly expanding computer systems. A 2014 report titled “The Risk of Cyberattack to the Maritime Sector” stated that “significant weaknesses have been identified in the cybersecurity of critical technology used for navigation at sea”, and the holes in security are so easily accessible that they are “not out of reach of even an enthusiastic teenager with the necessary skills”. One cyberattack could disable a ship, rendering billions of dollars worth of goods and Maersk property at the hands of cyberterrorists. The bigger the ship, the larger the threat – and the more nervous the insurance companies.

Maersk’s move to purchase larger ships may mean that shipping will become more efficient. However, at least in the immediate future, the purchases are likely to cause further problems. Not only do the ships pose huge financial and safety risks, but getting the product to port will become more difficult as workers must sort through even more containers. To make matters worse, U.S. ports are not made to handle such huge containers. Huge ships contain too much cargo to be removed in a timely matter. More and more ports are having to deal with congestion headaches, and with rising import volume, things are only set to get worse. Bigger ships do nothing to ease the problems at port; much of the time, their cumbersome size exacerbates the issues.

Rail and air are innovating in many areas, becoming more efficient and available. Shipping companies are lagging behind. Maersk needs to start thinking beyond “bigger is better”, and deal with pertinent issues that affect their customers, not their business alliances. A strong alliance is little help to a half empty ship.

The EPA released a proposal Wednesday which would implement tougher regulation on air pollution. The proposal focuses on the Clean Air Act, stating that airplane pollution from specific engines “endangers public health and welfare”. The authors...

Think about the supply chain of virtually every consumer good. If it travelled from a supplier, to a distributor, to a retailer, then most likely its cost is directly linked to the cost of the fuel that helped it make that journey.