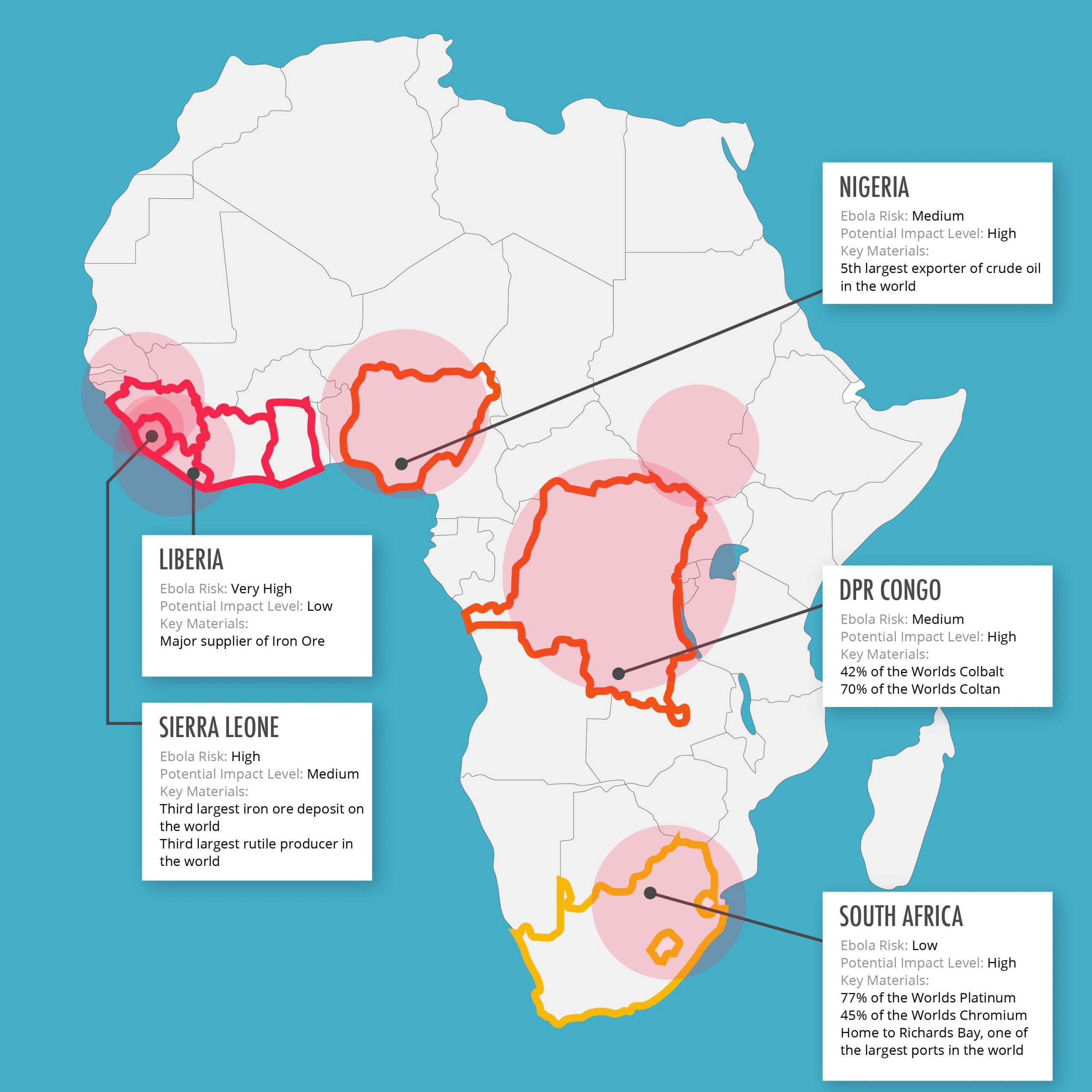 Ebola Vaccination For Your Supply Chain

What happens when the world shutters its doors to a continent of resources?

In August, ArcelorMittal S.A.—the world’s largest steel company—ceased production on an expansion to its iron ore site in Liberia. Flights in and out of Africa are being delayed and cancelled. Port activity is being suspended. International commercial activity has all but ceased in West Africa. Foreign Direct Investment projects in the region have ground to a halt—a tragedy for Sierra Leone and Liberia, the 2nd and 11th fastest growing nations in terms of real GDP in the world.

All this, from the spread of Ebola—which if not dealt with—will have farther reaching, unapologetic consequences on both the lives and economies of the world.

“The primary cost of this tragic outbreak is in human lives and suffering…But (The World Bank’s) findings underscore the huge potential costs of the epidemic if we don’t ramp up our efforts to stop it now.”

Fear as a Disease

Some will say that the mortality rate of Ebola itself represents a very slim threat in terms of economic impact. Fear however, is what will cause the entire continent of Africa to come to a halt. This stems from the inherent nature of Ebola, which is known for its long gestation period. An infected individual can go 21 days before exhibiting any symptoms of illness—essentially turning people into ticking time bombs. And once symptoms start, the person is immediately capable of spreading the virus. Fear then becomes more contagious than the disease itself.

This fear is causing governments and citizens alike to go to drastic measures to prevent the remote possibility of Ebola crossing their borders. Ports are implementing increased vessel search requirements in efforts to prevent infected stowaways from illegally immigrating. Crews themselves are being required to pass more strict health examinations, especially if they’ve recently been in a high risk region. Regulatory agencies are going as far as detaining and quarantining entire vessels where crew members are showing signs of infection—Richards Bay in South Africa did so back in August. Just last week, airline cabin cleaners at LaGuardia Airport refused to work out of fear of contamination. As of now, the World Bank’s conservative estimated global cost of the Ebola outbreak is $32B, but that number will only rise as the hysteria in Western Africa spirals out of control.

Two of the hardest hit countries, Sierra Leone and Liberia, have endured an estimated cost of $750M as a result of the disease. Coupled with West Africa, the lowest estimates put the current total economic cost of Ebola at $2.2B. Yes, billion. The highest? $7.5B. And the impact doesn’t stop there. These losses will put particular stress on the EU and China, as West African countries constitute 40% of the EU’s trade from African, Caribbean, and Pacific Nations. On top of that, Sub Saharan countries are responsible for 23% of China’s crude oil imports—its single largest source.

And as Ebola spreads throughout Africa, its true threat to the global economy becomes more apparent. Deaths caused by the disease have been recorded in Nigeria, The Democratic Republic of the Congo, and South Africa. Economic unease in these key regions has the potential to send shockwaves through global commodities markets.

Democratic Republic of The Congo

A Call to Action

As supply chain managers, risk is an ever-growing factor of our daily jobs. We’re called upon to assess a myriad of possibilities that may interrupt the flow of our supply chain at any given moment: political turmoil, factory fires, hurricanes, strikes—the list is nearly endless. But the one item that never seems to make it on that list—until now—is disease. And frankly, it’s never been much of an issue. So now that it’s here, what do we do?

The most conservative estimations have this disease continuing to wreak havoc on the continent of Africa well into the beginning of next year. Needless to say, the disease is a relentless and terrifying one.

The international response to Ebola is only the latest testimonial to the maxim that the best treatment for disruptions in our supply chains, from pandemics to factory fires, is preparedness. We can’t foresee the future, but we can damn well be prepared for it.