Amazon vs. Flipkart: The Race to Dominate Indian E-Commerce | Elementum

Amazon vs. Flipkart: The Race to Dominate Indian E-Commerce

Indian e-commerce company Flipkart is in fierce rivalry with Amazon over the country’s online retail market. Both have unique advantages, but the true test will be which company can best tailor its offerings to the Indian consumer’s palate.

Amazon has comfortably dominated America’s e-commerce market for years, but India is still uncertain ground. Another stalwart of Indian e-commerce has posed a serious threat to Amazon’s dominance: Flipkart, a domestic company and Amazon’s biggest competitor on the subcontinent, is nearly neck-in-neck for the loyalty of a population numbering 1.3 billion.

Founded in 2007 by two former Amazon employees, Flipkart is now tasked with the challenge of maintaining its market-share lead over Amazon India. On its website, the e-commerce engine claims to be the country’s “leading e-commerce marketplace with over 80 million products across 80+ categories” and approximately 100 million registered users. Amazon’s catalog, however, trumps that of Flipkart, with over 168 million different product offerings available in India.

In one of the fastest-growing markets in the world, the stakes are high. As online shopping platforms continue to gain traction among a young population four times the size of the U.S., the Indian e-commerce market is estimated to reach $200 billion by 2026. The potential for serious profit isn’t lost on either company. Both Amazon and Flipkart have already funneled billions of dollars into expanding infrastructure and delivery capacity in the country.

Flipkart has made several high-profile acquisitions over the past few years including eBay India, PhonePe, and online fashion retailers Mynta and Jabong, although talks to acquire e-commerce engine Snapdeal fell through late last year. The Softbank-backed company also has reading portal WeRead, electronics e-retailer Letsbuy, and Bollywood news site Chakpak under its belt.

Amazon, on the other hand, has relied less on acquisitions and more on strategic partnerships with local logistics companies to bolster business. Nearly 45 percent of Flipkart’s sales currently come from smaller towns and cities, a customer base that the company has an advantage over because of its understanding of how to market to an Indian audience. But Amazon doesn’t have this advantage.

In response, Amazon has targeted larger cities with more metropolitan customer bases while also trying to localize its marketing strategy. Approximately 65 percent of its sales come from larger metropolitan cities in which it has been able to generate loyalty through Amazon Prime. India became Amazon’s fastest-growing market for Amazon Prime in 2017, having grown nearly 5 times in size between the beginning of the year and October.

The so-called “everything store” is already aware of the cultural nuances that distinguish the Indian market from its American counterpart. It has tailored its strategy in India to cater to distinct characteristics like the dominance of mobile transactions, the high volume of small and medium businesses, and the popularity of Cash-on-Delivery (CoD) payment models. In 2015 it introduced the Amazon Chai Cart, a mobile tea cart that navigated city streets, serving refreshments to small business owners while simultaneously spreading word of the benefits of selling online. By the end of the campaign, the carts had engaged with 10,000 sellers across 31 cities. 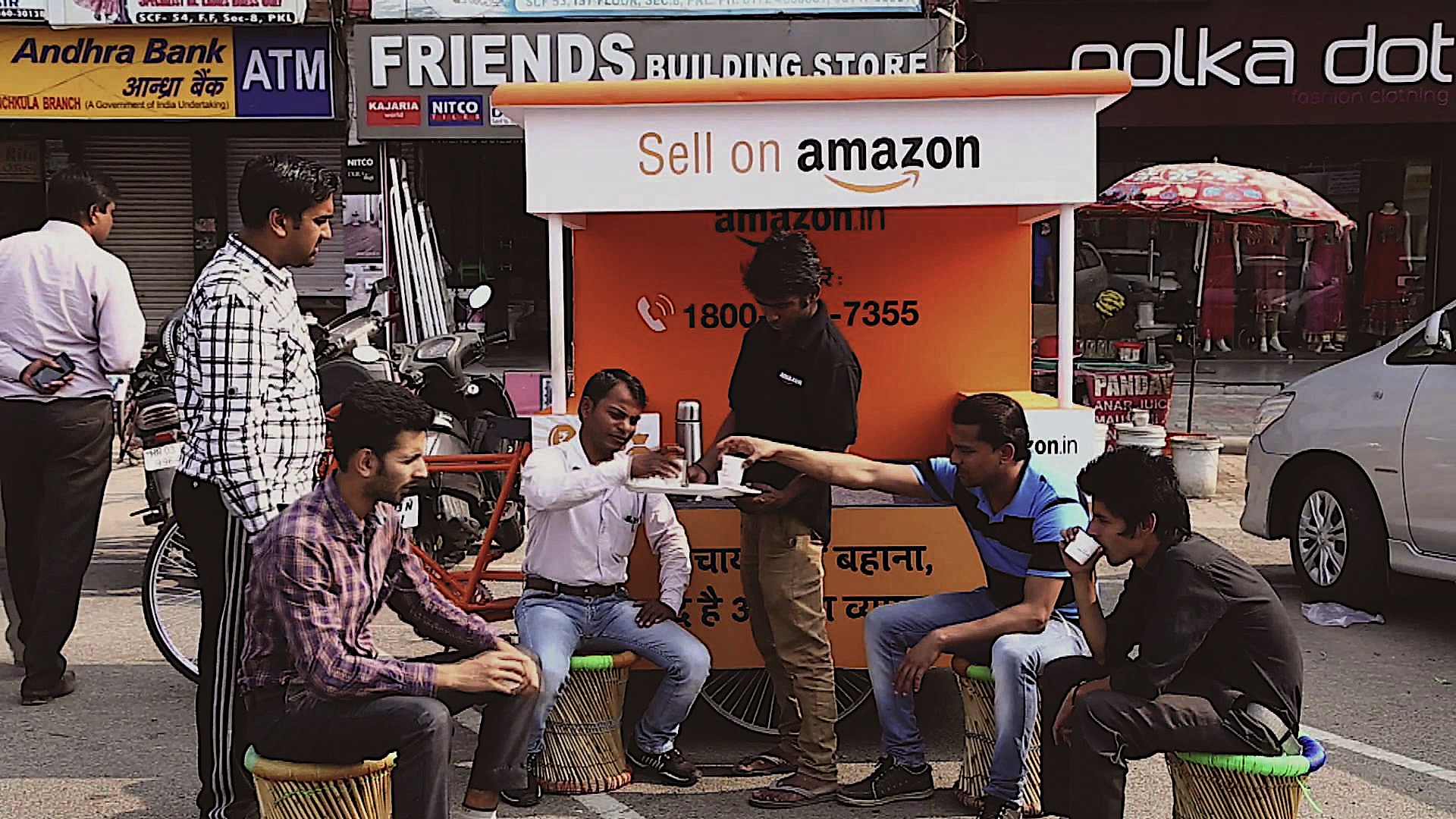 So far, Amazon has been successful in poaching customers from its biggest rival by offering lower prices across a number of categories, often to the detriment of its overall revenues. Manish Tiwary, Vice President of Category Management at Amazon India, announced that it had secured twice the orders of the nearest competition. Flipkart countered this figure with a reminder that it continues to lead the pack in terms of market share, with 60 percent control of Indian e-commerce. Analyst estimates, however, peg this figure closer to between 40 and 45 percent.

A recent development that may spell a turn in both companies’ fortunes is the acquisition earlier this year of Flipkart by Walmart. The $15 billion deal came as a setback to Amazon, with analysts predicting roughly a 30 percent market share loss for the company in India. But for both Flipkart and Walmart, the deal means new (and lucrative) opportunities. After failing to make headway with its own brand name in the subcontinent and facing saturation in the U.S. market, Walmart has gained a sizeable foothold in India with the acquisition. And for Flipkart, the deal could further establish domestic dominance by helping the company expand its product base beyond apparel and electronics.

Flipkart has the advantage of being a homegrown company facing fewer legal constraints than its foreign competitors. But Amazon’s success is impressive given its relatively late start to the game; its foray into India began in 2013 following a series of regulatory hurdles aimed at constraining foreign direct investment before Narendra Modi’s “Make in India” campaign changed the way foreign companies were welcomed in the country. Since then, the company has been able to catch up to local competitors, thanks in part to localized services. These include taking orders by telephone and conveying items directly from sellers to customers via Amazon motorbikes. Such offerings, by matching Indian expectations of customer experience, have bolstered the company’s success in a place where personalization is a must.

New regulations like stricter packaging compliance laws are expected to accompany the expansion of e-commerce in India, which remains in its infancy despite rapid growth over the last few months.

While the two companies duke it out for market dominance, they must both respond to broader trends of rising internet and smartphone use as disposable income grows among Indian consumers. While the jury is still out on which e-tailer will come out on top, India’s growing online market spells huge profits for every company in the race.